Witness to the ruins

Witness to the Ruins condenses our experience as witnesses to one of the most ambitious urban development projects undertaken in Bogota, at the threshold of the millennium.
It speaks of our choice as artists, confronted with the deep paradoxes of reality; our testimonial role. It’s precedent lie in the four projects developed by Mapa Teatro between 2001 and 2005: C’undua, Prometheus I and II Act, Re-moved, and Cleaning the Augean stables. Performed in theatres and museums as well as in non conventional spaces, Witness to the Ruins unites in a four moving screen dispositive, the images, testimonies and stories of the last inhabitants of the Santa Inés-El Cartucho district, before, during and after its demolition and the building of a ‘non-place’, the Third Millennium Park.
Before and through the gaze of the last inhabitant of the El Cartucho District, Juana Ramirez, who carries out on stage, the same action she performed daily during her last few years at the district (preparing arepas and hot chocolate), we attend a farewell ceremony of an important episode in the life of our city. However, this farewell event constitutes an act of resistance against oblivion, against the disappearance without a trace. This woman’s vitality, her final burst of laughter in the middle of the empty and lonely park, serve as brutal testimony to the survival force in human beings before the disaster produced by the paradoxes and arbitrariness of power.
“…Witness to the Ruins is moral anthropology in pure form, meaning, recreational reflection on the unpleasant turn of events for the ‘disposables’, the disinherited in the world, trapped in a whirlwind called ‘urban development’, which in cities like Bogota and countries like Colombia, hasn’t been nothing more than an incessant demolition and exclusion process. And this vivid reconstruction of the destruction of the Cartucho street and the Santa Ines district, uses both old and new theatrical art forms, known primarily as an ethic imagination, to tells us a memorable story, that of a handful of witnesses to the ruins, who’s model dignity challenges our good consciences a long time after the lights are turned on and the curtains go down”.
Hernando Valencia Villa, Madrid, February, 2008.
Artistic Team
Concept and direction
Heidi Abderhalden and Rolf Abderhalden
Dramaturgy
Heidi Abderhalden
Assistant director
Ximena Vargas
Performed by
Juana Ramírez
Visual design
Rolf Abderhalden
Sound and music composition
Carlos Benavides "Champi"
Stage manager and lighting design
José Ignacio Rincón
Camera
Lucas Maldonado, Heidi Abderhalden
Edting
Lucas Maldonado, Rolando Vargas, Luis Antonio Delgado
Production
Ximena Vargas
Touring
Rutas Panamericanas

April, 2011
No Boundaries: A series of global performances 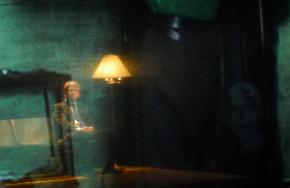